Hope and the Rainbows

On the way home from the mammogram and ultrasound, I hung a lefty (no pun intended) and found myself at a couple of funny places. One was my Grandma's where she lived in the 70's. I couldn't tell you where she lived without a street directory right now but Thursday I ended up at the end of her street accidentally. My sister says Grandma is sending me a hopeful message. She and I were very close. She taught me to knit. 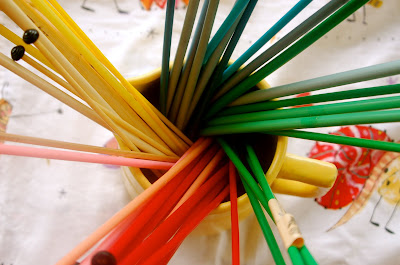 So I popped into Spotlight not much further from there and bought a big bundle of rainbow coloured wool. Shorty is into the Rainbow Song so a rainbow bed spread will be dandy. I also feel a yen to crochet so I don't bite my nails to the bone over the next week. Then I swerved by Ron and Brian's. I had decided not to buy more of these a while back but having just been to Grandma's and Spotlight, I reversed that decision. I love knitting on somebody else's old needles! It feels connected and calm and solid. They are rather pretty too. 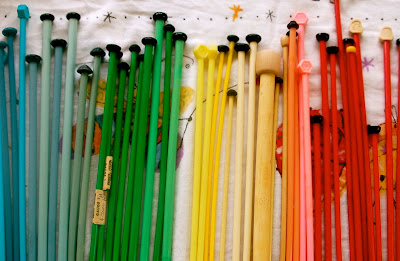 There happened to be a bedhead at Ron and Brian's for $10 so I bought it for Shorty who is on a mattress as we haven't had time to switch the beds around. 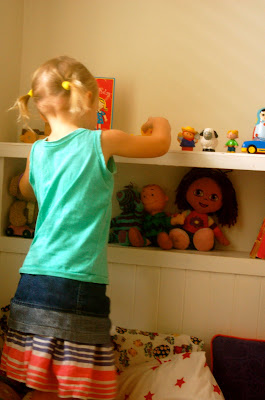 It is line up Heaven. What colour, if any, do you think it should be painted? 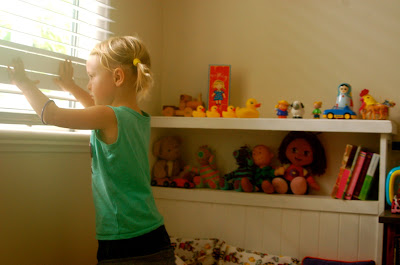 Lala had to remake her bed as she had visitors in her hair again. This Laura Ashley fairy quilt set was $4 from the oppy. She tolerates it but it will soon be moved away from her to Shorty's room. The three year old is far more appreciative of fairies than the 9 year old, dark one. The Art Park yellow one is also from the oppy. It was used as Shorty's bassinette mattress cover so I love it even more. 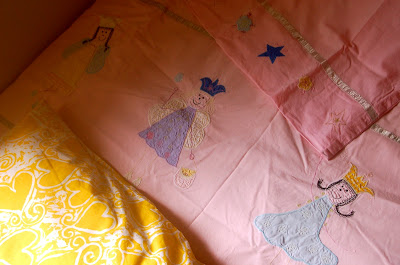 At cricket this afternoon, Shorty met a little girl called Hope. A sign? I'm choosing to read it that way. Later while she slept in the car and the cricket got wetter, I worked on her rainbow blanket. I may need to make a travel bag for the crochet for the times when I am waiting in the car. 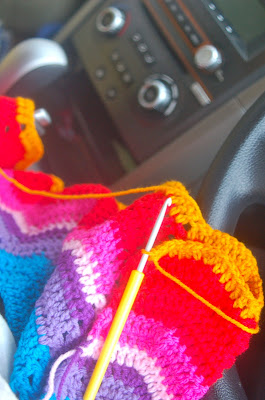 I relish miserable rainy days like this. It was perfect to sit and crochet and stare at the cloud wrapped mountain. These fat coloured crochet hooks are so much more cheerful than the grey metallic ones. Rain means never having to say your sorry when the chillun veg in front of a screen and want spag bol for tea. They WANT it Anna, really! 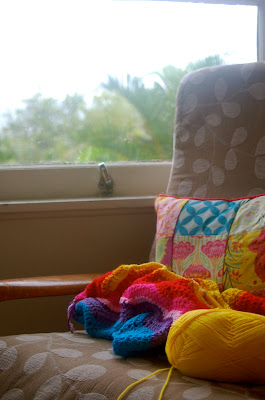 So now I'll fill you in on the other stuff. Friday was a bit of a dud as they wanted to do a lymphatic biopsy too. The doctor didn't like the machine. After lying there propped on pillows with Lefty pointed at the ceiling like St Peter's Basillica, they postponed it all till Monday. S'okay though. I figure between Grandma's intervention, the rainbow connection and meeting Hope in person, things are looking pretty good here. 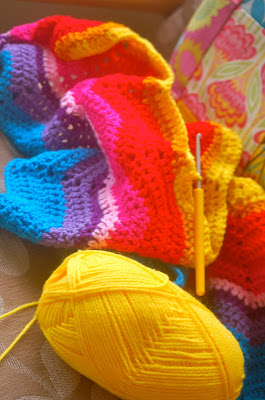 Email ThisBlogThis!Share to TwitterShare to FacebookShare to Pinterest
Labels: bedhead, crochet, knitting needles, op shop, rainbow, sheets, these are a few of my favourite things

Comments are the best bit. Drop in if you have time. You are most welcome!